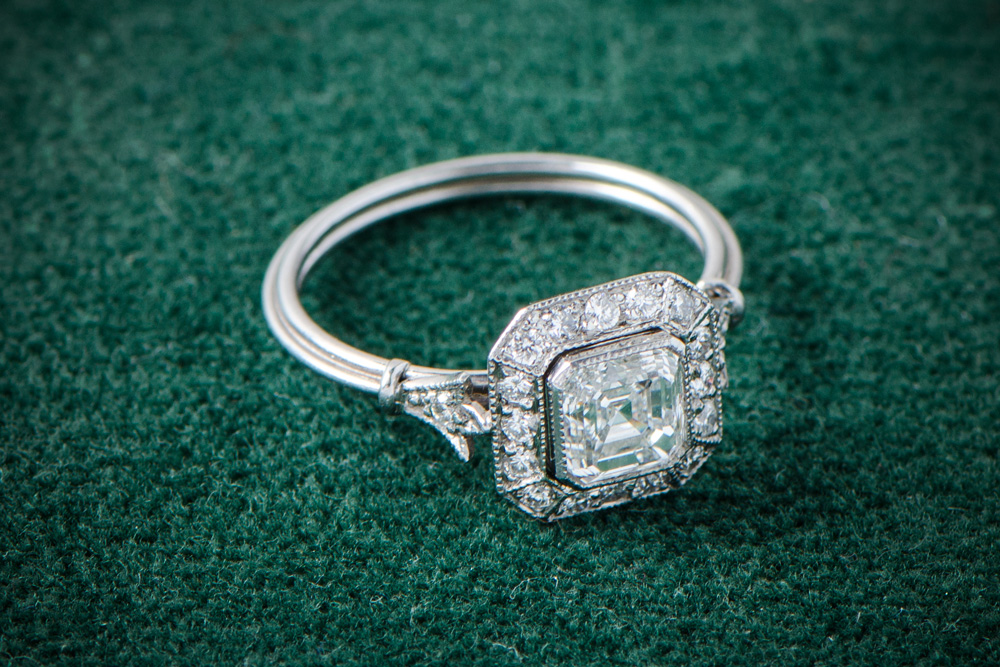 Given the current celebrity trend for engagement rings that contain large, impossible-to-ignore diamonds, it’s easy to forget that designs haven’t actually changed all that much in the last one hundred years. It’s true that the center stones today have increased in size as the relative wealth of the wearer has increased, but the basic style has persevered through an ever-changing world dominated by fashions that go almost as quickly as they arrive.

A diamond set atop a platinum band dates back to the mid-Victorian era, and first became popular during the Art Nouveau period as a demonstration of delicacy and femininity. The ability of platinum not to overwhelm the diamond has kept it popular to this day, and it is still by far among the most common metals used for diamond engagement rings.

The main differences between modern and antique are the fashion-within-a-fashion subtleties that go into the present day designs. Improved tools and the refinement of cutting and setting techniques mean that designers have a little more flexibility in how a ring should be constructed. Although all this advancement sounds like a positive, it does have its down side. Being able to create fashionable, high-quality jewelry means that some of those designs don’t age as well as a classic antique engagement ring, and are highly susceptible to the ever-changing influences of modern fashions.

The reason that antique platinum diamond engagement rings are still so sought after owes a little to luck as well as good management. As platinum became more readily available, so its desirability increased. The physical characteristics of platinum are quite unique, in that it is malleable, stable, and extremely resistant to oxidization. These characteristics mean that, as well as keeping its appearance better than gold, there is less evidence of wear and much less distortion of the original band. If you’ve ever seen a very old 24 carat gold wedding ring, for example, they are often slightly flattened on the “bottom” side of the ring as worn, and can even show significant thinning through general wear and tear. Platinum, in contrast usually shows only minor evidence of a patina through friction against the skin.

Given that platinum only became commercially viable to mine in the late 19th century, it’s unlikely that ring manufacturers fully appreciated its longevity, but we certainly reap the rewards today!

Modern-vintage designs have become increasingly popular since the dawning of the age of celebrity, where ring designers set out to recreate genuine Art Deco designs using up to date techniques. In the best examples, it is often very difficult to tell a modern-vintage from a genuine antique platinum diamond engagement ring.

But it isn’t just the age of a ring which makes it interesting. The best antique rings carry their own history, whether the wearer was famous – or infamous! – or circumstances were such that good or bad luck seems to follow the piece around, genuine antique engagement rings just have a quality that sets them apart from the pack.

Are you planning on getting a platinum engagement ring? Tell us in the comments below.