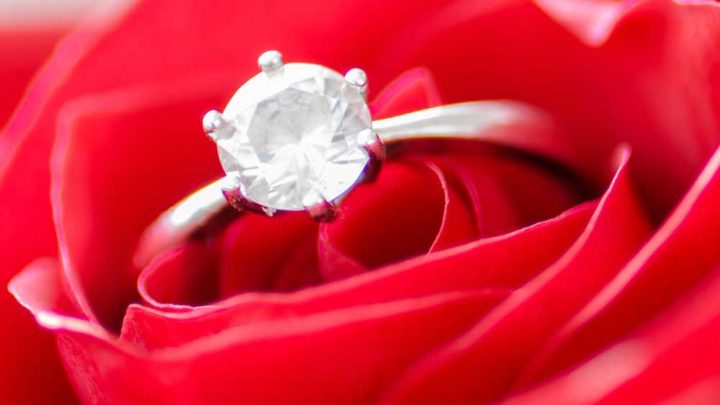 Many superstitions have their roots in faith. Some are no more than common sense, and some are downright baffling. But, despite that, plenty of people do believe in them. How many times do you see ballplayers who need to put the same shoe on first before every game? Or people who need to salute three times if they see a single magpie on its own? Like we said, baffling.

Superstitions are the type of thing which we pick and choose whether to believe. We might walk under a ladder one day, but spill salt without a second thought the next. We all know about the “something old, something new…” superstition for brides on their wedding day but, did you know there are superstitions surrounding the engagement and even the ring as well? No, really, there are.

Not your wedding day, or even the day of the engagement, but the day you buy the ring. A curious American superstition is that the day on which you buy the ring will dictate your future. It is, if you like, the engagement equivalent of the “Monday’s child…” rhyme. According to the ring superstition, Friday isn’t a good day to buy a ring. It isn’t clear why, though. Friday the 13th, perhaps? Buying on a Monday will cause the buyer to lead a busy life, so make your own mind up on that!

Don’t Let Another Woman Wear It

If another woman wears the ring insincerely, that is she’s not the owner, she will steal the fiancé. This one is probably little more than an excuse not to let anyone else wear it, and we do understand that. An engagement ring is an intensely personal thing. It’s absolutely right that it shouldn’t be passed around like a new hat.

Why The “Ring” Finger?

The third finger of the left hand is, at least in most western cultures, the only choice on which to wear both wedding and engagement rings. Superstition says that the Veina Amoris (vein of love) connects this finger directly to the heart. Whether medical professionals would agree is debatable, but it’s a sweet superstition. Could it be that the ancient Romans with whom it started just knew a marketing hook when they saw one?

If an engagement ring is loose, it will be a bad omen for the relationship. After all, if the ring doesn’t know which way to point, then how can it be a lasting engagement? Of course, the real bad luck with a loose ring is that you might lose it somewhere along the way. This is probably one of those that go more towards common sense than superstition.

Three stone engagement rings are very much in the news in 2018, thanks to Prince Harry. When he proposed to Meghan Markle, he did so with a ring containing 3 diamonds. Harry sourced one personally from Botswana, and the other two were from his mother’s collection. The 3 diamonds represent the past present and future, with the superstition telling us that to lose one would be devastating for the wearer.

Never Take It Off

To take off off an engagement ring means it was never meant to be worn and would bring terminal bad luck. At least that’s what the myth says. We do see an awful lot of women who have perfected the art of moving the ring from one finger to another without ever losing skin contact, though. Perhaps they know something we don’t!

Ruby – The Stone Of Love

Long before De Beers decided we should all be buying diamonds, rubies were very popular betrothals stones. The blood red color matched the heart and, if love was waning, the ruby could top it up. It is true that rubies do make spectacular engagement rings, but do they physically carry a supply of love in them? It would be nice if they did, but…

Aquamarine – The True Gemstone Of Love?

For all the association of rubies and diamonds with love and affairs of the heart, it is aquamarine which really carries the responsibility. Said to inspire truth and trust, the wearing of an aquamarine engagement ring is said to guarantee a happy marriage. Aquamarine is a very beautiful, and a very underrated gemstone, by our reckoning, so we’re going to choose to believe this one.

Don’t wear until he proposes.