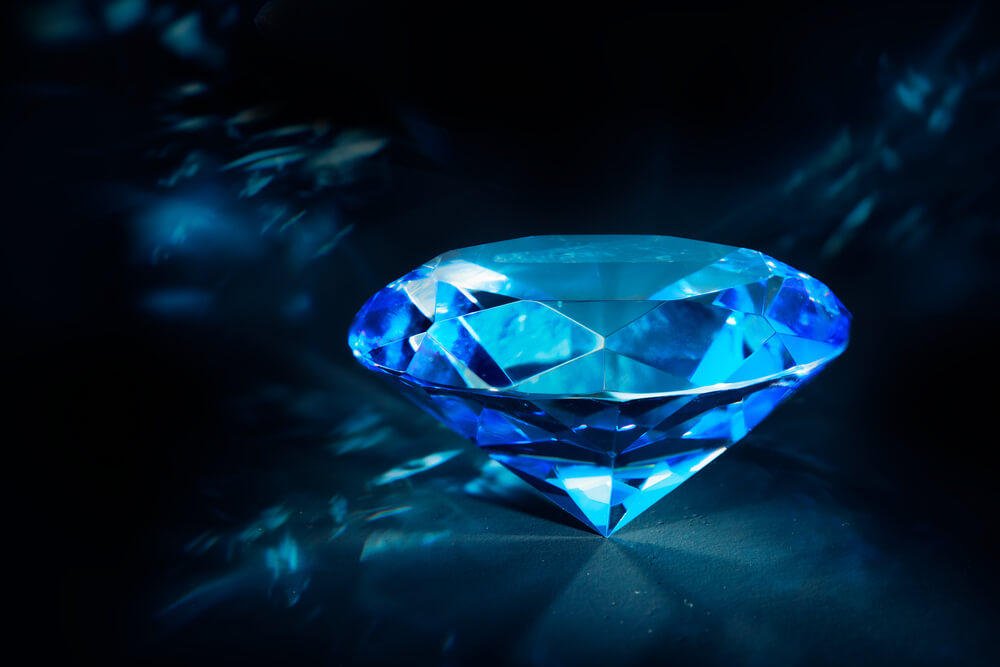 Some objects, when seen under an Ultraviolet (or “black”) light will appear very white to the naked eye. This can be clothing, purpose-made party products and even teeth. But it may come as a surprise to know that approximately 30% of diamonds exhibit visible fluorescence. It’s easy to assume that anything which makes a diamond appear whiter than it actually is can only be a good thing, but that’s not always the case.

Color and clarity can affect – positively or negatively – the appearance of diamonds not just under UV light, but also in normal daylight. Diamonds with little or no color and good clarity, but with high levels of fluorescence can actually look slightly hazy or milky in normal light, whereas the appearance of those with slight color and lower clarity actually improve in daylight. This makes the purchase of diamonds that have fluorescence a little less straightforward than you might think.

Why Only Some Diamonds?

Some diamonds contain trace amount of the element boron, and it is the boron reacting with UV light which causes the fluorescence. The fluorescence we see is actually the visible light that the diamond emits as a result of the boron when exposed to UV light. Daylight contains UV rays, which is why diamonds can be affected by the natural light all around us.

Although not part of the classic 4 ‘C’s of diamond grading, the stones are still almost always assessed and graded on a fluorescence scale that ranges from “Faint” to “Intense”. It is each individual diamond’s place on this scale, coupled with both the color and clarity, which determines how the stone will appear to the naked eye under either natural or artificial light.

Obviously, the more boron present in the diamond, the more it will fluoresce. The amount of boron present will be too small to identify unless under a black light, where the higher the level of boron, the brighter blue the diamond will appear. Because, generally speaking, high clarity/color and high fluorescence don’t go well together, don’t assume that high-priced diamonds are immune from fluorescing. Conversely, lower quality diamonds can appear better than they actually are because of the apparent improvement fluorescence can bring. It isn’t quite so simple in practice, but it does mean that the question is worth asking before you hand over the money.

The cut of the diamond will usually not affect the effects of fluorescence, over and above the light reflecting properties already exhibited, so whether it’s an old european, a brilliant or an asscher cut makes no real difference.

Is The Fluorescence Always Blue?

We’ve mentioned that about 30% of diamonds exhibit some fluorescence, but only about 10% of those show enough fluorescence to the point where it is considered to affect the appearance significantly in natural light. Although 95% of diamonds that fluoresce will show blue, some will show white or yellow fluorescence, and even occasionally red. Because blue is opposite to yellow on the color spectrum, yellow diamonds can appear whiter in color as the blue fluorescence balances the color of the diamond itself, and the color becomes much more neutral.

So Is Fluorescence Good Or Bad?

It isn’t either, actually. As with many things, buying jewelry depends as much on personal choice as anything else. Reputable jewelers and dealers will always happily tell you the fluorescence grade of a diamond, and will also explain what it means that that particular stone. The fact is that the levels of fluorescence in an individual diamond will rarely be such that it significantly affects the price. At extremes of the grading, any resulting milkiness may reduce the price slightly, but probably not even enough to make the diamond comparable in value to one in the GIA grade below.
Ask, make sure you get an answer and then make your decision on whether to buy or not.